Your shopping cart is empty.

Your shopping cart is empty.

Blog > Across America: The Return West

Across America: The Return West

After a memorable Thanksgiving with family, Michelle, Yuba, and I loaded up our vehicle and embarked on what would end up being a 4,000 mile return trip across America.  Our goal was to avoid snow storms and pass through the middle of the country as quickly as possible in order to, maximize our time in Colorado and Southern Utah.  As anticipated, though, avoiding storms was challenging.  We ended up staying put in a few locales we wouldn’t have otherwise chosen for a lengthy visit.  But, adjusting to weather and shifting the itinerary are all part of the road trip experience, and I took advantage of the extra down time to work on the launch of my online storefront: http://dnbwallart.com

Opportunities for landscape photography were limited until we reached the Rockies, but I did manage to shoot a dramatic sunset across a large, frozen field in Kansas and photograph the world’s tallest rocking chair in Illinois. 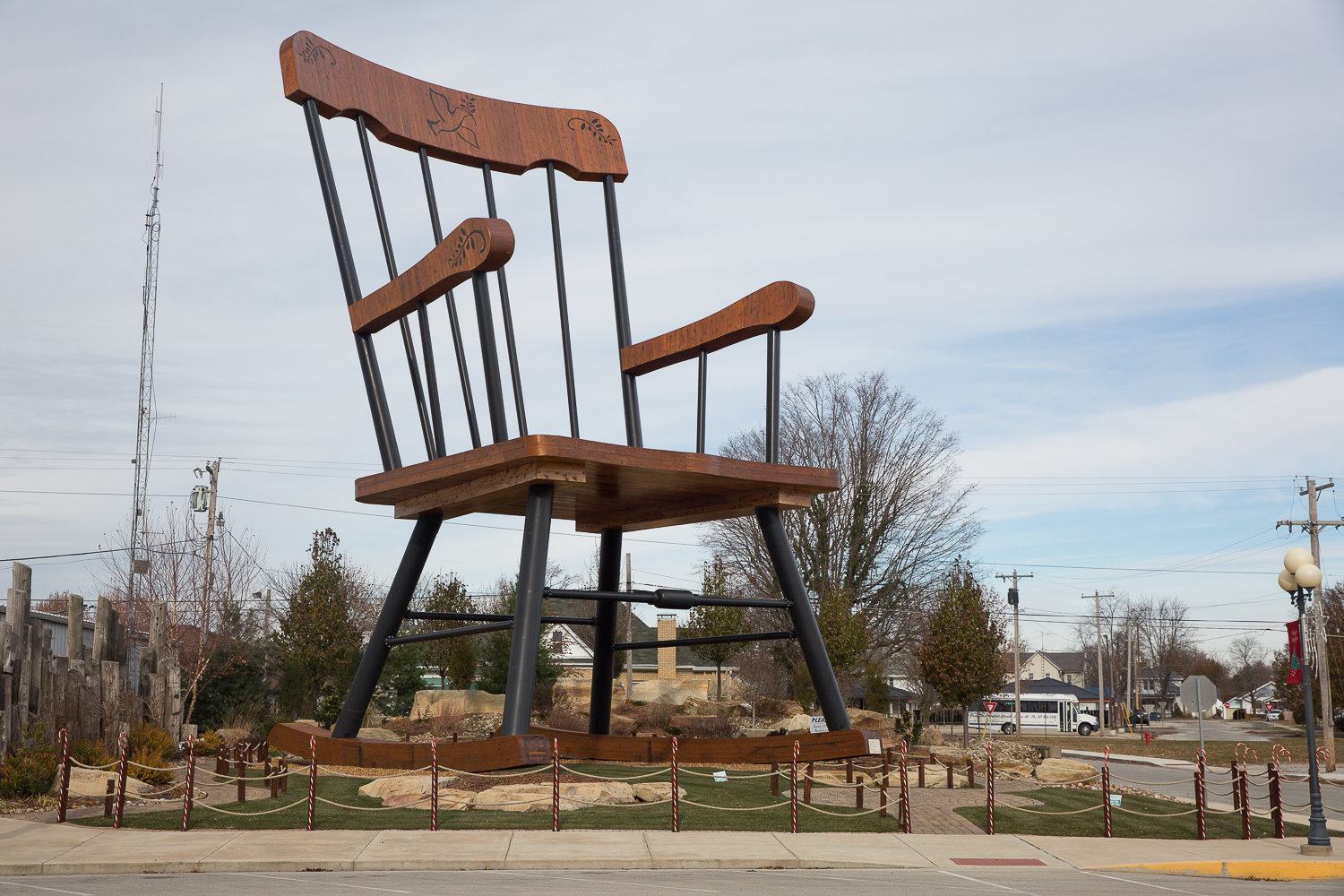 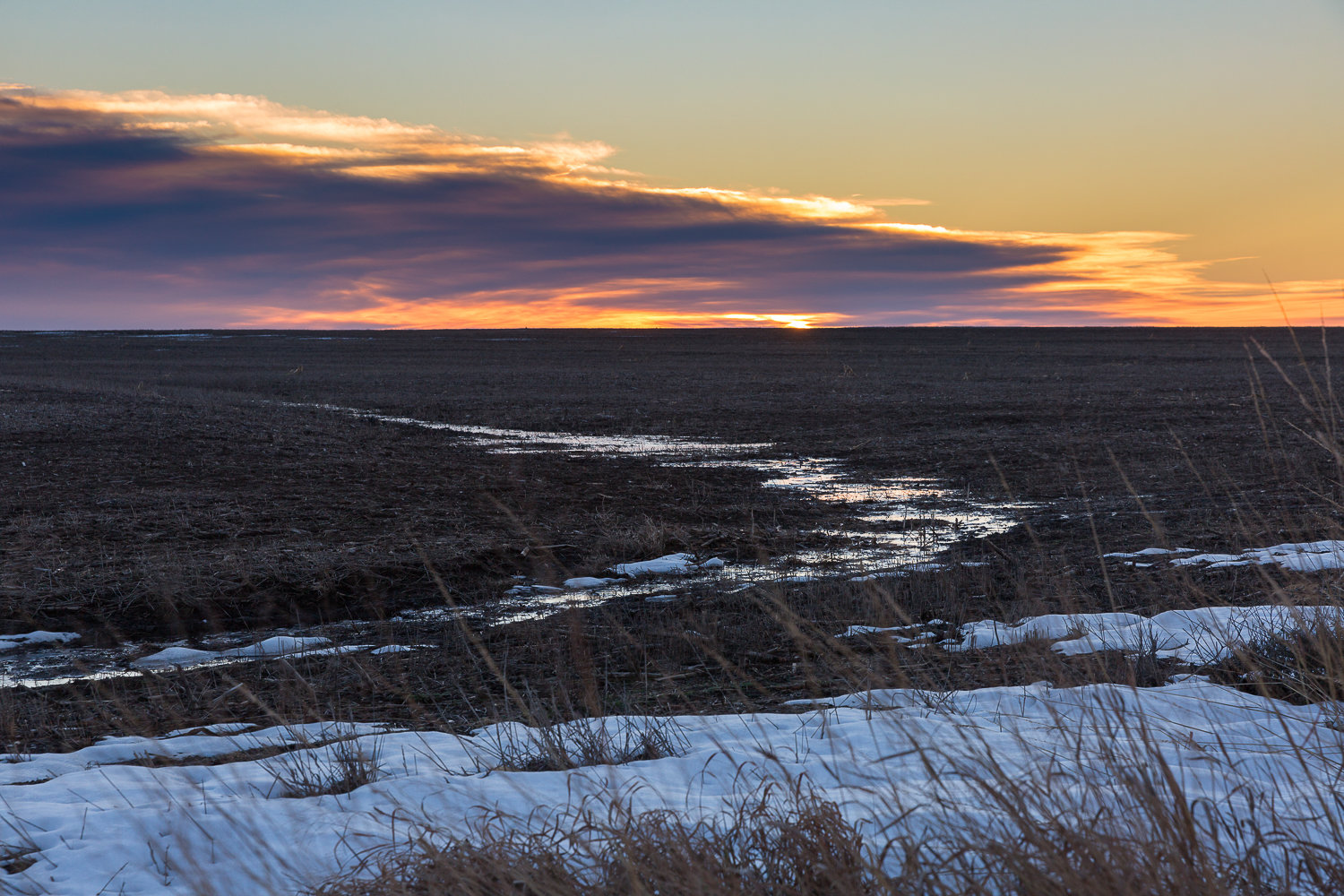 It was amazing to bring Yuba with us on this adventure.  Everywhere we stopped, he was treated like a celebrity.  There has  always been something about him that immediately attracts attention.  It was a role that he embraced as he entertained everyone with his ability to "talk," but at times I think he wondered if we were ever going home. 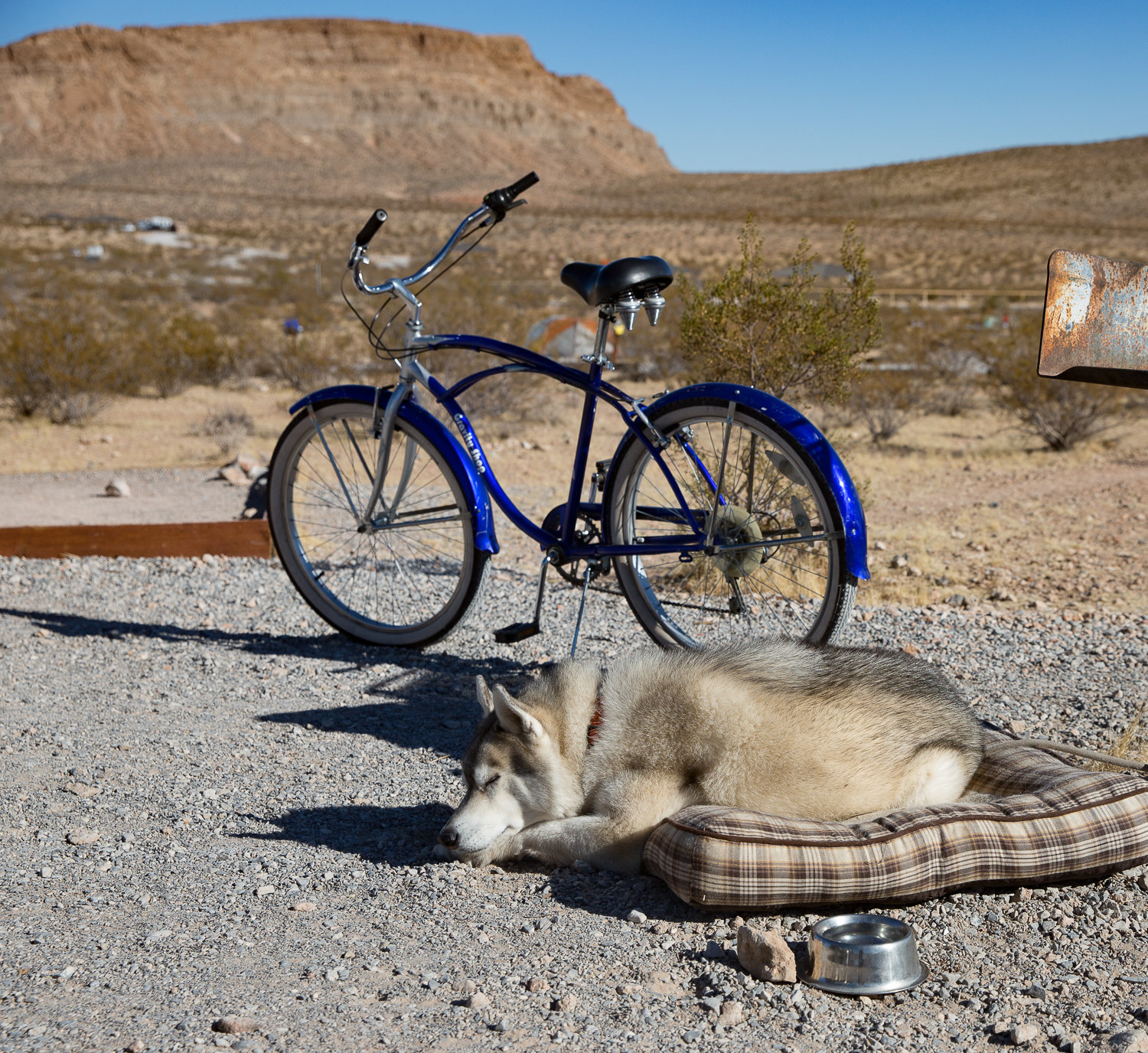 As we neared the Front Range,  I remembered what it felt like to first hit the Colorado border 11 years ago when I moved to Lake Tahoe, driving from New Hampshire.  It is surreal to think back on how different my life was at that time and how little I knew about the American West, or the journey I was about to embark on.  This time, we didn’t have quite the grand entrance as we inched slowly through a major storm on I-70.  To recharge, we decided to stay in Silvethorne.  It felt good to be in the Rockies again.

While en route to Grand Junction, we spotted a herd of Big Horn sheep just outside of Glenwood Springs.  Using a 70 - 300 telephoto lens, I was able to capture two males colliding at full speed.  I have photographed big horn sheep many times, but this was the first time I captured a moment like this. 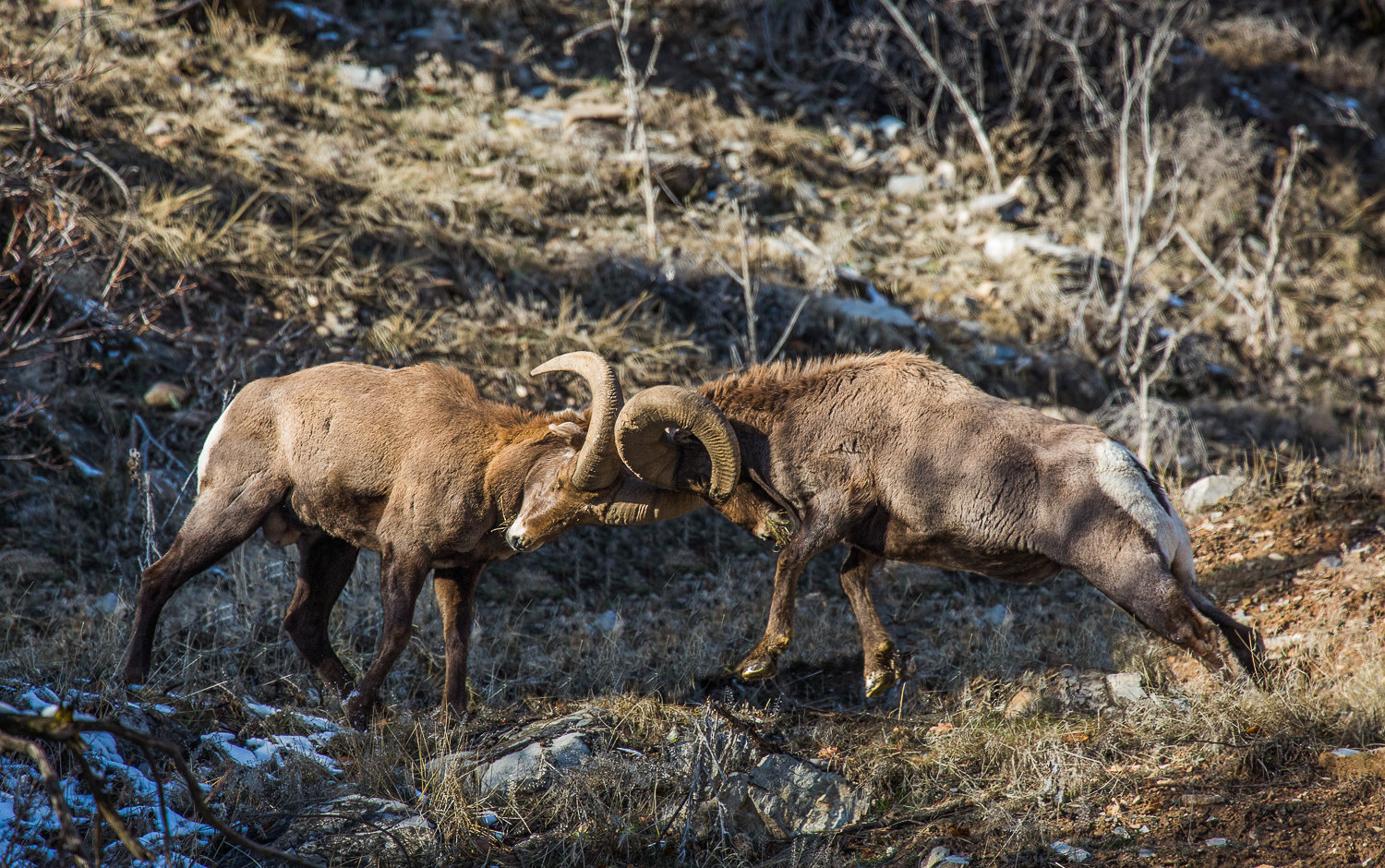 Faced with yet another winter storm, we decided to extend our stay in Grand Junction and explore Colorado National Monument, the “Heart of the World.”

Entering the park, we were immediately impressed by the sheer size and steepness of the canyons.  With a short window in the morning to shoot under calm but overcast skies, we explored and photographed a number of vista points along the loop road.  Before long, the next wave of snow moved in and for a while, I was able to shoot the storm entering the canyons and incorporate the snow flakes into the landscape.   I knew right away that these grey and stormy images would lend themselves to a black and white conversion.  But I had caught the moment just in time -- We soon found ourselves in whiteout conditions and decided to head back to our hotel room. 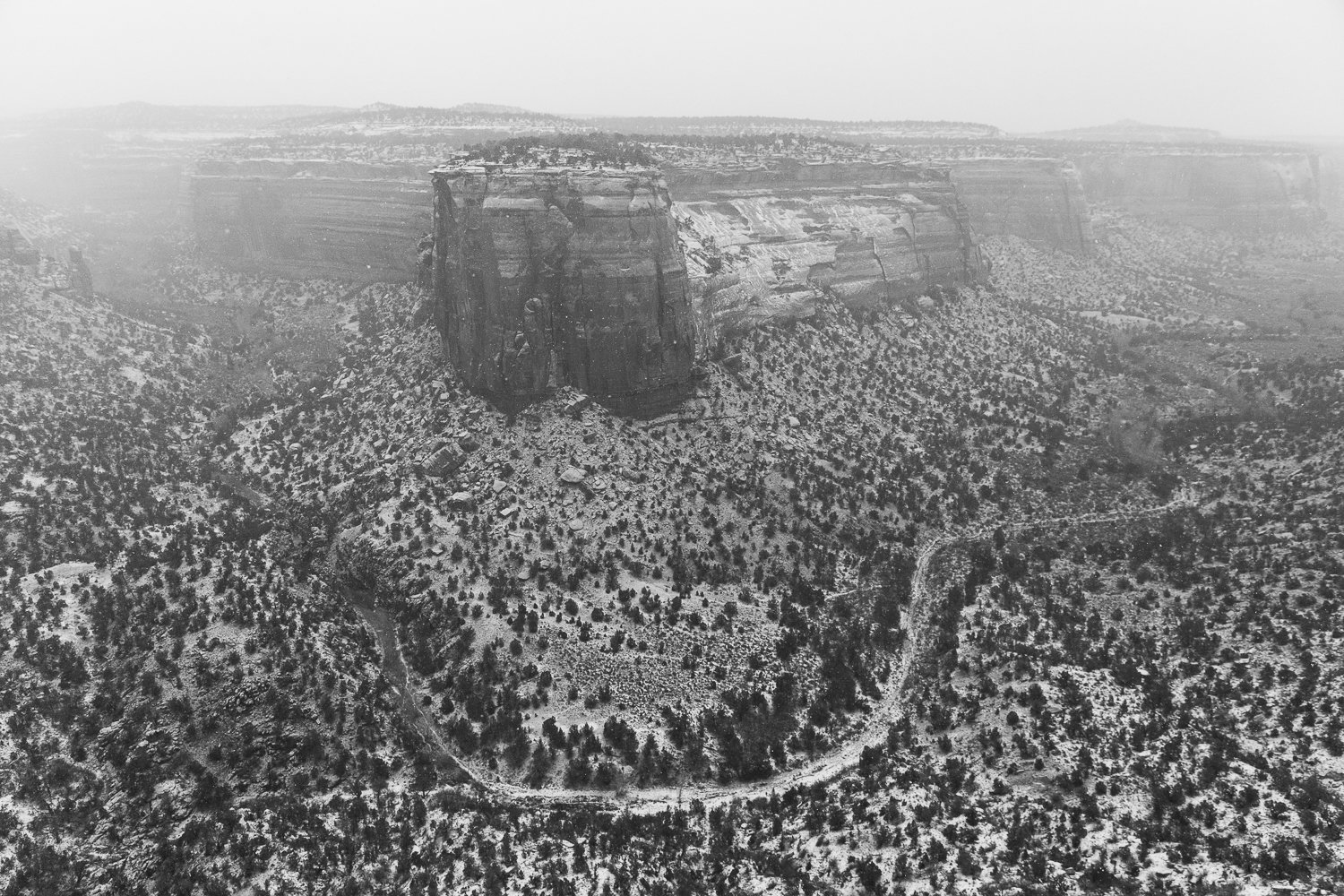 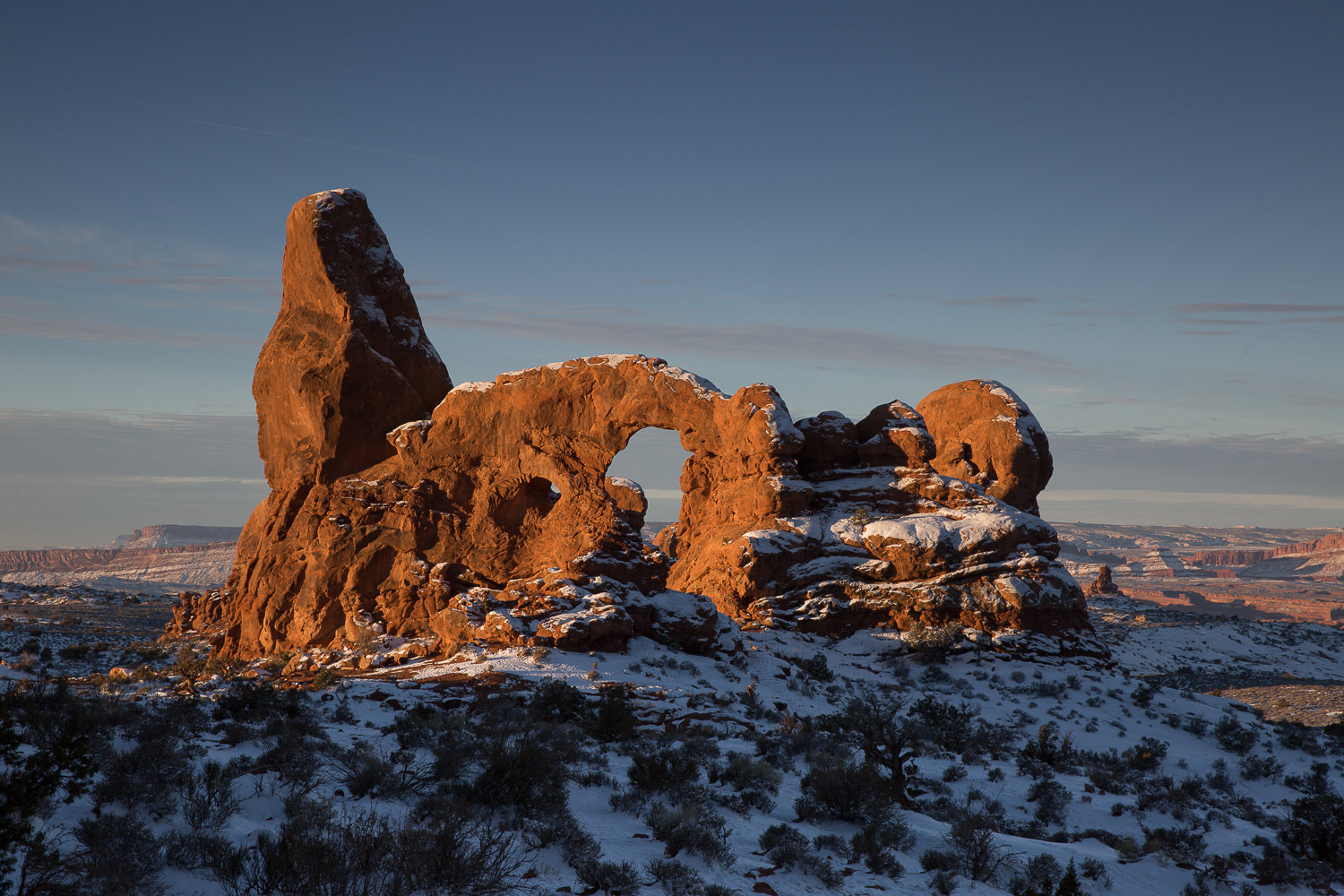 The cold storm came and went and we woke up early to head to Moab, Utah for the final leg of our adventure.  As we crossed over the Utah border, it soon became apparent that it had snowed at all elevations.   Red rock country is awe inspiring in all seasons, but I was especially excited for the rare opportunity to capture it during stormy weather, with a fresh coat of snow on the ground.  It seems few other visitors were around to appreciate this, though; when we reached Moab, it was a ghost town.  I had only been there previously in the spring,  once with First Tracks Productions to shoot a segment from “Off the Beaten Path” (https://vimeo.com/242412115) and once just to camp and hike.  For good reason, Moab is a huge destination for tourism and the little town can get crowded, but we were happy to experience the true off-season there.

With frigid temperatures and snow, the nearby National Parks were nearly empty.  We hiked on a number of trails in Arches NP and shot both the sunrise and sunset there.  With the low angle of the December sun, various types of clouds moving in and out of the park, and snow plastered to the red rock, I couldn’t have asked for more dramatic scenes to shoot over a 48-hour period. 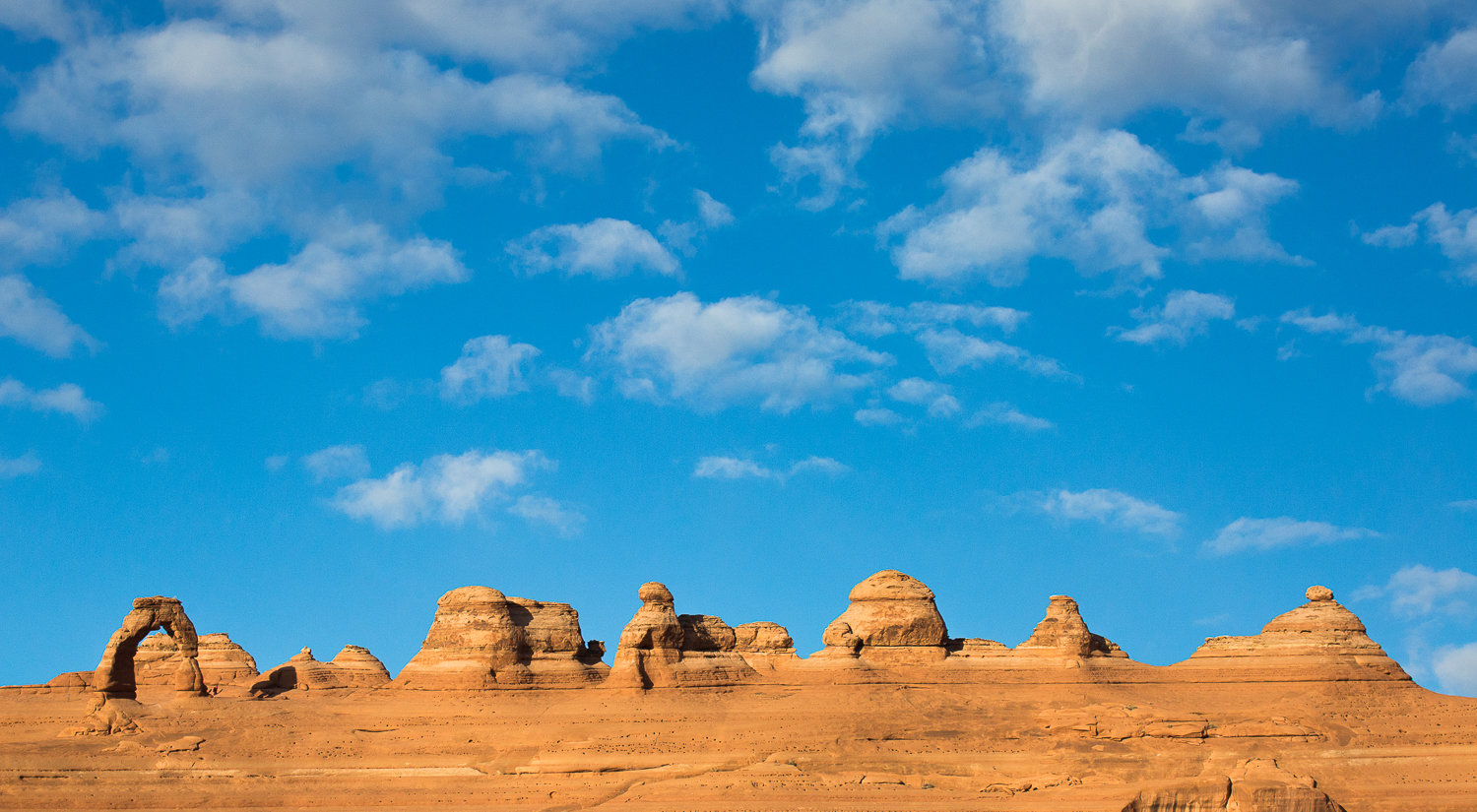 Our next stop was Canyonlands NP, where I shot one of the most memorable sunsets I have ever witnessed  Before leaving, we also explored the La Sal Mountains, which were equally impressive.  Everything lined up perfectly.   I couldn’t have been happier with our experience in Southern Utah and the images I took with me. 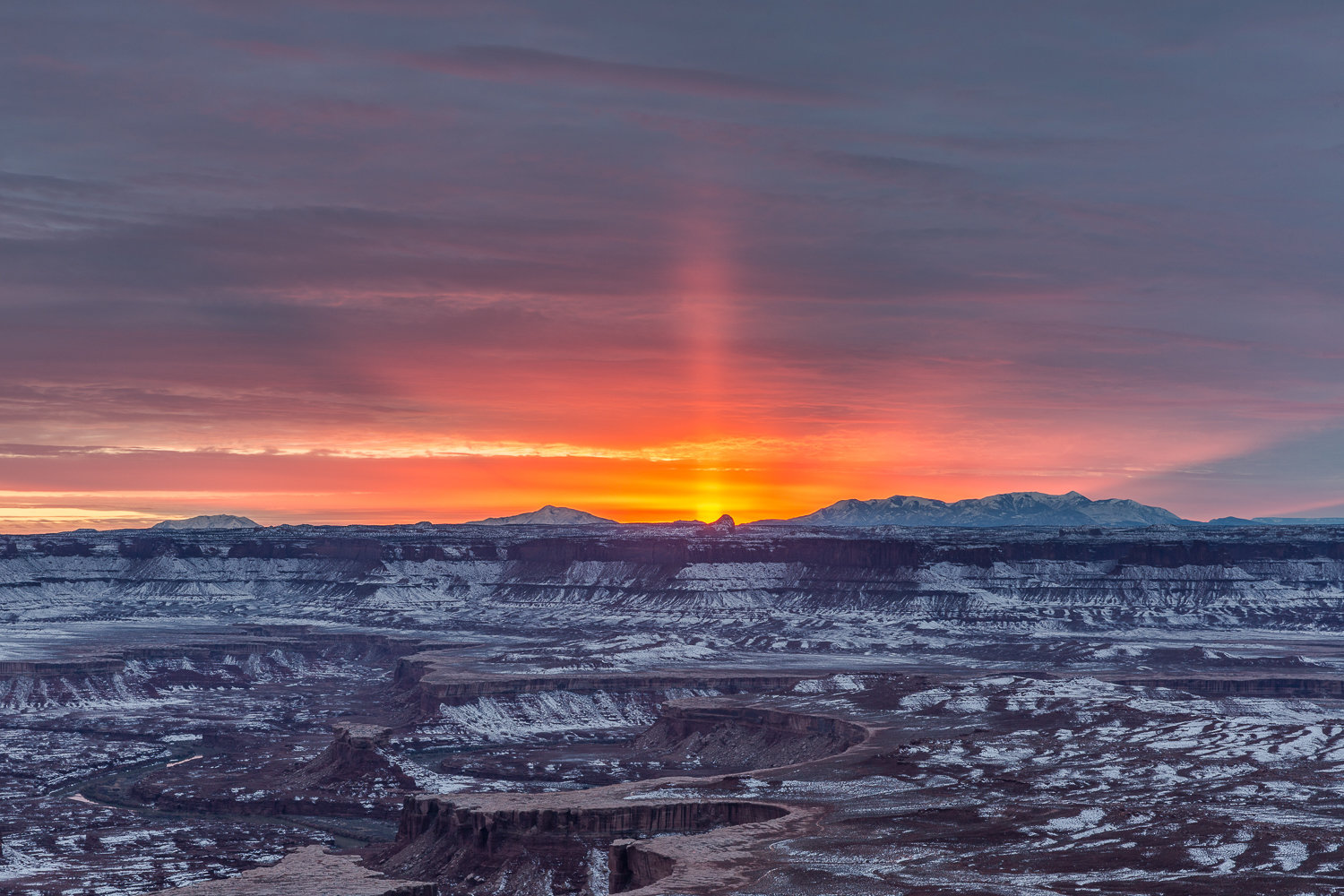 At this point, we had been on the road for a long time, camping and staying in hotel rooms.  We had an amazing journey, but felt ready to head back to Lake Tahoe.   We stayed with friends in Salt Lake City, then drove across Nevada in one day.  The last time I took my camera out on the trip was to photograph a crystal clear reflection and inversion on the Bonneville Salt Flats, which I later converted into an eight image panorama.

In total, we drove an all-electric vehicle 8,000 miles through 16 states over the course of one month.  By camping whenever possible, finding the best rates on hotels, and eating mostly our own food, we managed to do all of this for far less money than one would expect. 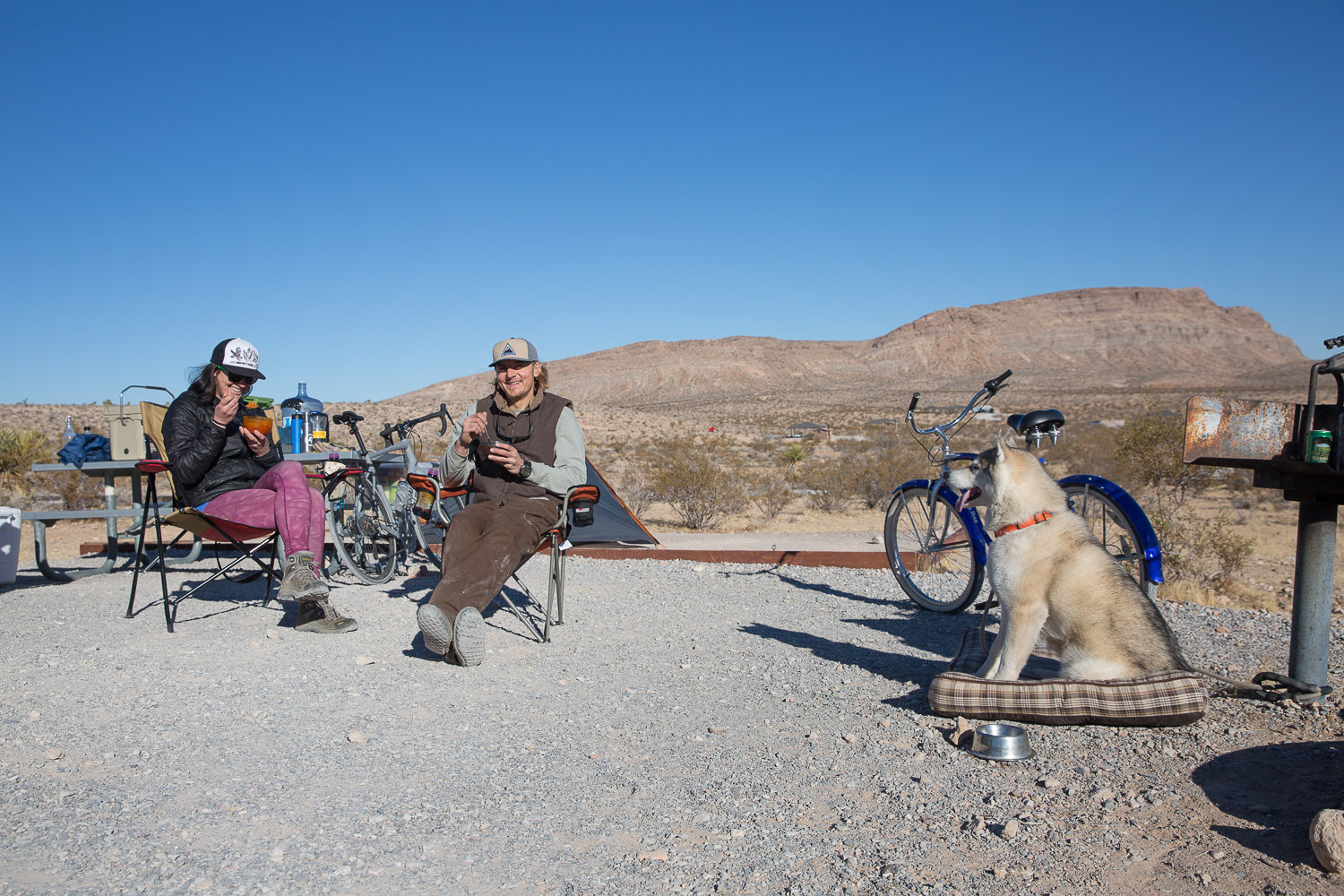 It takes a long time to drive across the country without feeling rushed, but with the right outlook, it can truly be a worthwhile experience.

The presence of this badge signifies that this business has officially registered with the Art Storefronts Organization and has an established track record of selling art.

It also means that buyers can trust that they are buying from a legitimate business. Art sellers that conduct fraudulent activity or that receive numerous complaints from buyers will have this badge revoked. If you would like to file a complaint about this seller, please do so here.

The Art Storefronts Organization has verified that this business has provided a returns & exchanges policy for all art purchases.

We expect you to be completely satisfied with your order. If you are not pleased with the final product please contact us at 530.208.8178 within 30 days of receiving your item and your order will be refunded or replaced.

This website provides a secure checkout with SSL encryption.

The Art Storefronts Organization has verified that this Art Seller has published information about the archival materials used to create their products in an effort to provide transparency to buyers.

All signed limited edition print orders are produced with archival quality inks and paper. For sales of open edition prints, please see https://art.bayphoto.com/ for a detailed description of each item that is offered. Many of the available products are archival.

Become a member and be the first to receive new content and special promotions.

This is only visible to you because you are logged in and are authorized to manage this website. This message is not visible to other website visitors.

The above preview shows how to use the live preview on this website. The image displayed is just an example, and is not available for sale.

This means you can use the camera on your phone or tablet and superimpose any piece of art onto a wall inside of your home or business.

To use this feature, Just look for the "Live Preview AR" button when viewing any piece of art on this website!

Below, select which favorite lists you would like to save this product into.

Enter your email below and we'll email you a 20% OFF Coupon right now!

This offer is valid for NEW CUSTOMERS only!